The Foundation is a tribute to the work of Dr. Bettye Bouey Yates.

With the support of an international organization, Dr. Yates, a lifelong educator, went to South Africa during apartheid to support Black and Colored teachers and to assist them and their families in dealing with the harsh realities of their daily lives including unjust and immoral imprisonment.  After Nelson Mandela’s election as President of South Africa in 1994, Dr. Yates decided to return to South Africa to see and experience the changes that had taken place. Several friends heard about her plans and asked to accompany her. Her first visit back in 1996 was the genesis of the “South African Adventure”, a 14-day trip to South Africa that Dr. Yates personally conducted once or twice a year until she reached the age of 91 in 2016.

In 1998, travelers on one of Dr. Yates’ South African Adventures made an unscheduled stop at the Christianenburg Primary School in the Township of Clermont, Province of KwaZulu-Natal near the city of Durban. Established in 1844 by Lutheran missionaries, the school is historically significant for being the first private school established for African children in this black township. The travelers found deteriorating buildings and almost non-existent basic educational tools. They observed students writing their lessons outside in the dirt and later discovered that students routinely worked outside because there were not enough pencils to go around.  The school was required to be self-sufficient, which was virtually impossible considering the high rate of poverty and lack of jobs in the area. There were few books and educational supplies and little opportunity for physical education or after school activities.

Upon returning home, these travelers committed themselves to providing meaningful assistance to the students, teachers, and staff at the Christianenburg school. Efforts to assist the school began immediately. The travelers sent basic educational and art supplies and electronic equipment (TV, VCR, and videos). Dr. Yates asked each subsequent group of travelers to bring along with them some of the educational items the school had requested. The travelers began to think about a mechanism for providing on-going assistance to the school.  The Dr. Bettye Bouey Yates Education Foundation was founded in 1998 and incorporated as a non-profit organization in 2003 in Washington, D.C. when it was designated as a §501(c)(3) under the U.S. Internal Revenue Code.

In August 2009, two Board members conducted an on-site evaluation to determine the effectiveness of the Foundation’s efforts to assist the Christianenburg school. They interviewed parents, teachers, and the principals of the Christianenburg school, the principals of three other primary schools in the area, and the principal of a high school where the learners would continue their education. They reported that the learners, educators, and staff had made excellent use of the books, materials, and facilities funded by the Foundation. The high school principal confirmed that the Christianenburg learners were somewhat more advanced than those from other primary schools in the area.

Today, the Christianenburg Primary school serves over 1200 students in grades one through seven under the provincial Department of Education.  Since 2010, the Foundation has extended its efforts to two other public primary schools in the same township: the Clermont Primary School and the Clernaville Primary School.  In 2010 and 2011, the Foundation funded the distribution of approximately 300 dictionaries each year to additional schools for their seventh-grade learners, gave the Clernaville library a set of encyclopedias, and purchased 180 readers for the Udumo and Clermont schools. 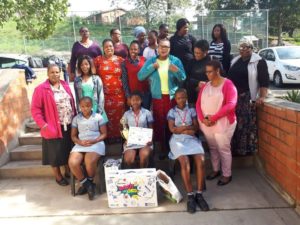 In 2018, students from Clermont placed second and third place in the district-wide Science Olympiad and earned the top three positions in the Math Olympiad.  Christianenburg ranks second overall among the 6,000 schools in the KwaZulu-Natal District.  National test results have improved. Parents are excited about their children’s progress and enthusiasm for learning.

Together we can make a difference!